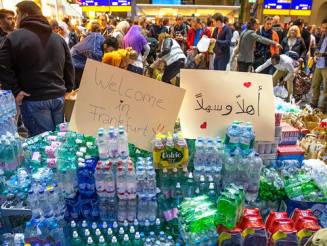 Translated by IWS from Pro Asyl: The federal government has agreed on Sunday in the coalition committee on a package of measures on asylum policy. Under the rubric “remove disincentives” several measures of deterrence policy of the nineties have been reactivated.
On Saturday, the government had allowed with a generous gesture several thousand refugees stranded at the Budapest Central Station to enter Germany, but already on Sunday the grand coalition presented a decision which contains numerous restrictive measures, among other things.

Deterrence policy as in the nineties
To avoid alleged “disincentives”, asylum seekers will in future have to stay six months instead of three in the Erstaufnahmelagern (first Reception Centers). The measure will be accompanied by the decision to impose again the Residenzpflicht to the people crammed in the Erstaufnahmelagern. The residence obligation (Residenzpflicht) that forbids them to move freely in the Federal territory. Furthermore the refugees will again receive vouchers and food parcels – according to the motto: Eat what comes from the office. In this way several instruments of deterrence and exclusion policies of the nineties, which had been liberalized step by step only in recent years, are reactivated.
The six-month placement in first Reception Centers will exacerbate the already disastrous accommodation situation. To increase the accommodation capacity two or threefold of the existing facilities will create unbearable living conditions for thousands of people, fuelling conflicts within the facilities themselves, marginalizing and stigmatizing those affected. The promise of the federal government to increase the capacity of the Reception Centers of about 45,000 to 150,000 will be impossible to achieve in the short term.

Exclusion, discrimination, stigma
The planned issue of vouchers instead of cash is unconstitutional and will be imposed to refugees from all countries of origin – contrary to public perception. To give money in cash is not a supplementary benefit, but serves the constitutionally guaranteed socio-cultural subsistence level – ie to allow a minimum of participation in social life.
To insinuate that refugees enter Germany due to the low cash benefits (143 euros for a single person) is not only an insult to all those people who are fleeing racial discrimination, war and persecution. This populist decisions fuel a debate based on envy, the breeding ground for an increase in racist instigated propaganda and violence against refugees.
All this is a fatal signal, given that racist violence against refugees is not decreasing. Again last weekend refugee homes were set on fire and several people were injured in an alleged arson attack in Baden-Württemberg.

Helpfulness of citizens is thwarted
The decisions are a fatal signal in view of the fact that in recent days, in Germany, thousands of people welcomed refugees at the train stations and other places with spontaneous relief. The wave of readiness to help asylum seekers is indeed highly praised by the Federal Government, but de facto is these exclusionary measures from the government clearly thwarts the involvement of civil society.
The hopefull refugees who entered Germany from Hungary with Merkel posters or german flags were welcomed by citizens with relief and applause at the stations. They are now threatened to be soon stuck for a long time in grueling overcrowded Reception Centers – marginalized, disenfranchised and stigmatized.
The solidarity with refugees must therefore no longer be limited to donations of clothes and welcome gestures, but urgently need to be directed against the current plans of the Federal Government – to the CDU, CSU and SPD to make it clear that the nineties are definitely over.

Update 3 On 31/1/2021 at 21:00 we have a continuation of a workshop about Sudanese refugees from Schaumberg/Niedersachsen online to discuss the refugee’s situation. This is the 4th workshop now. We are not going to be silent, until the deportation is stopped, until the isolation of refugees is broken, and until the primary, secondary, and universal… Read more »

Open Letter from the Transbalkan Solidarity Group Currently there are tens of thousands of refugees and other migrants in the Balkans. Some of them are accommodated in official collective centers, while a large number of people fall outside the system, surviving through the help of the local population and support provided to them by volunteers… Read more »