AUDIO: Speeches against the eviction of Gerhart Hauptmann Schule – March 2014

Our beloved Sista Mimi passed away in December last year. She never stopped her political activities or voicing her anger and discontent at this unfair world.  The fight goes on and she is still in our thoughts. We wanted to share some photos of her in action with everyone and the last speech we wrote together. 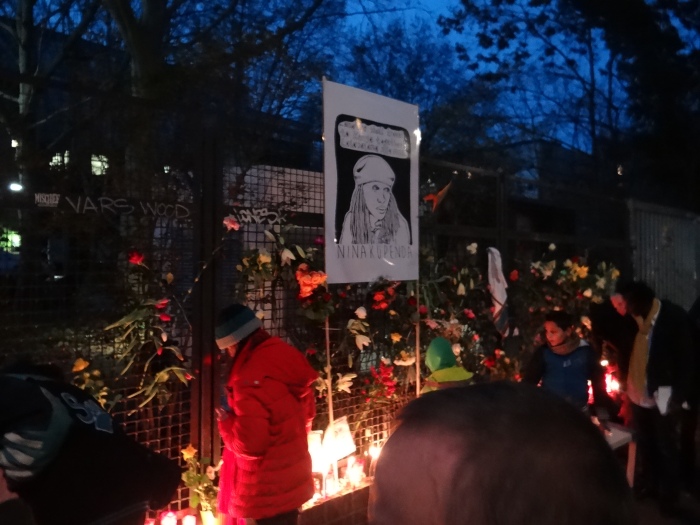 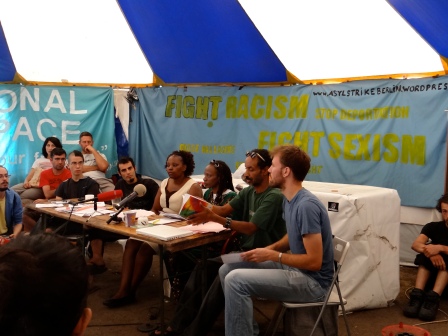 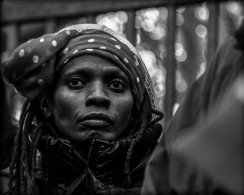 We are human and alive and we have a heart and our blood is red, and all that we do is because we have democratic aspirations.  And the occupation of the school is a culmination of such aspirations, affording people the opportunity to choose their own place to live.

It’s been over one year since we occupied the school. We have built a community and this community belongs to Kreuzberg. You can not deny our existence and our will to stay where we feel at home.

Therefore we want to stop with these stressful rumors about a soon to come eviction of our house.

Some say the Senate is searching for alternative houses, but nobody knows anything concrete about these houses. There are also the ever so disputed lists, with names of people who would be granted a house. Not everyone living in the school are part of any list. The Senate refused to come to school and get the names of the people in a transparent way. Names were collected here and there, in different addresses, days and times. People were not previously informed. Some found out about these temporary offices where those who were in one of the lists were given a white plastic card that doesn’t guarantee anything. Or at least we don’t know what they are supposed to guarantee.

We have been open for discussion.

You, Frau Kolat, have come only once to speak to us and then disappeared. All we hear now is that the Senate of Berlin appears to be apathetic towards the state of the people living at the school.

We ask you Frau Kolat, Herr Wowereit, Herr Henkel: Are you planning to throw women and children on the streets? To send the men to Görlitzer Park and then accuse all of them to be drug dealers, criminals who should be put in jail and later deported? Its that your plan?

We say it again: we have a house and our house is the occupied school in Ohlauer Strasse, Kreuzberg. And we are here to demand an open forum, where we can discuss our future.

There is plenty of evidence and information about how non transparent the process and deal with Oranienplatz was done. Until today you did not even keep the promises you´ve  made. Now you are trying to repeat the same strategy with the aim of reestablishing “law and order”. Not with the aim of helping people in need who had to flee from unbearable conditions which are partly caused by Germany, the world´s third largest arms dealer. We, the refugees had to leave our loved ones and our homes. We risked our lives and now we, the people living in the school, are not going to accept the same colonial strategy of divide and rule.

We remind you of what the europeans have written in the Article 26 of the Geneva Convention of 1951 concerning the right of refugees:

Each Contracting State shall accord to refugees lawfully in its territory the right to choose their place of residence and to move freely within its territory subject to any regulations applicable to aliens generally in the same circumstances.

We know our rights and the fact that we do have the right to choose our place of residence and to move freely within the territory of Germany. That’s why we also remind you of our basic demands:

And last but not least: NO ONE WILL MAKE US FEEL ILLEGAL IN OUR OWN PLANET.

On the 27.05, the inhabitants of the Lager at Niedstr 1-2, sent to Frau Tomaske (LAF) the following complain. Until today, they didn’t receive any answer and there are no changes in this unsustainable situation. What is LAF waiting for? (Deutsch unten) Dear Frau Tomaske, In Soziale Initiative Niederlausitz e.v. Notunterkunft Neidstr 1-2 12159 Berlin,… Read more »

Posted originally by www.wirmachendas.jetzt  Photo: Inga Alice Lauenroth  We women of the world have united, and we shout: International Strike! We see sexist shit all over the world. In Russia, domestic violence has been decriminalised. In many places, girls are forced to marry and bear children. We see a rise in antifeminism here and everywhere…. Read more »

Klick HERE for the Press Release which was published few days ago. Watch the video: https://vimeo.com/154353396 International Women Space got to know Viviana when she was still living the emergency shelter (Lager) at the Wiesenstraße, in Wedding, Berlin. On te 29th of January we went to the Notunterkunft to have a coffee with Viviana and… Read more »

Update 3 On 31/1/2021 at 21:00 we have a continuation of a workshop about Sudanese refugees from Schaumberg/Niedersachsen online to discuss the refugee’s situation. This is the 4th workshop now. We are not going to be silent, until the deportation is stopped, until the isolation of refugees is broken, and until the primary, secondary, and universal… Read more »

by Borderline – Europe Panel discussions on the illegal activities of the EU border agency and its glaring control deficit. Criticism of practices that violate human rights has accompanied the “European Border and Coast Guard Agency”, or “Frontex” – since its founding in 2004. From its involvement in illegal pushbacks to its cooperation with the… Read more »

The asylum-seeking population is mostly affected by the lack of opportunities, by the limitations of the state and its structures. Their integrity, their identity, their lives are in mortal danger where they come from and when they arrive here they are met with indifferent and inhumane treatment by the BAMF and the Ausländerbehörde. These institutions… Read more »

After six days of protest the district provided a favorable response and met almost all of our demands. The document is now under Napuli’s name. Now it’s possible to establish an info-point again which is allowed to be as big as 7 x 11 meters. The document states that “the info-point can be used as… Read more »